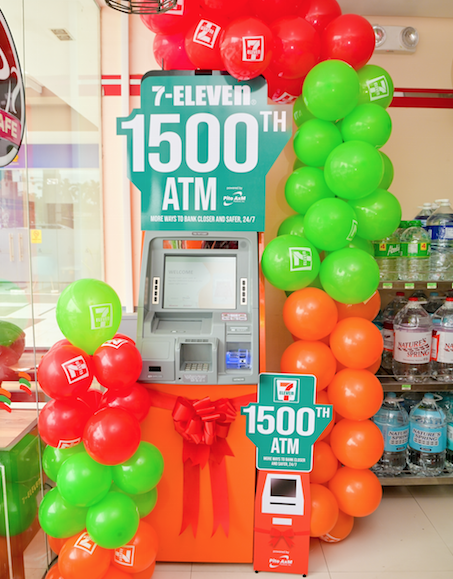 7-Eleven continues to make safe and convenient banking accessible to more Filipinos as it expands its ATM services across the country, marking the activation of the 1,500th cash-recycling ATM in Casa Mira, Cebu City.

This was made possible with its partnership with Pito AxM Platform, Inc. (PAPI), the local subsidiary of Seven Bank, Ltd. of Japan.

Philippine Seven Corporation (PSC), the exclusive licensor of 7-Eleven in the Philippines and PAPI, plan to have 150 cash machines operational in Cebu by the end of June.

“We have aggressively expanded the 7-Bank ATM network in Metro Manila and Luzon during the pandemic.  This 2022, we reach another milestone as we set foot in Cebu, signaling our further expansion of ATMs in Visayas and Mindanao,” said Jose Victor Paterno, President and CEO of PSC.

PSC and PAPI plan to deploy 1,500 additional cash machines by the end of 2022, aiming to cover the majority of over 3,100 7-Eleven stores nationwide.

Masanori Sakaguchi, President of PAPI, stated “We are very happy to serve our precious customers in Visayas, and the ones in Mindanao very soon. We hope everybody appreciates our sophisticated ATM services imported from Japan.”

Besides Land Bank, PAPI has a partnership with BDO, the largest bank in the Philippines, to accommodate free cash withdrawals by its cardholders.  Meanwhile, other bank account holders may transact through BancNet, with a Php 10 transaction fee.  More partner banks will be announced soon.

ATMs at 7-Eleven stores are cash-recycling machines. The ATMs also have a unique feature of delivering the ATM interface depending on the customer’s bank, providing familiarity and ease of use.

Lawrence De Leon, Head of Finance at PSC, said the ATMs provide an innovative solution to the cash handling requirements of 7-Eleven stores nationwide. “The sales are deposited by our store operators and the ATMs “recycle” the cash to fund withdrawals of the customers of the different banks.  This creates a lot of value to our customers because of the convenience of having ATMs available 24/7 in a safe and secured location. The ATMs also provide flexibility in cash management since deposits are immediately credited to PSC’s corporate bank account,” De Leon added.

PSC partnered with PAPI in February 2020 to equip all 7-Eleven stores with cash-recycling ATMs.

For more information on where to find the ATMs, please visit https://www.7-eleven.com.ph/whatsnew/atms-in-7eleven-list-of-stores/. 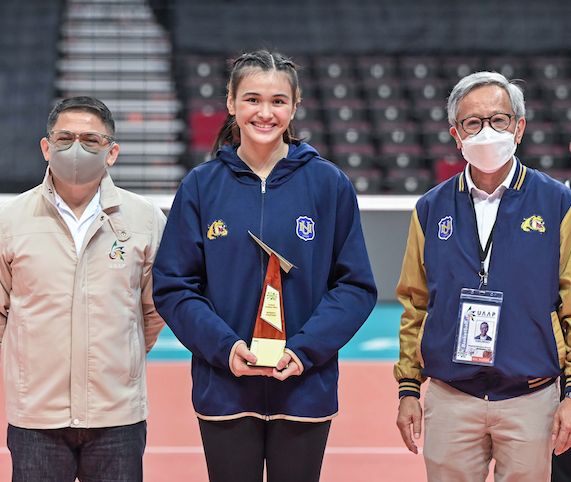 Mhicaela Belen was hailed as the UAAP Season 84 women’s volleyball tournament Rookie of the Year and Most Valuable Player – making her the first-ever in the league’s long history.

National University’s Belen was just everywhere, leading the league in the service department at 0.47 per set, while also placing second in spiking with a 38.96 success rate, and third in scoring with 203 points in the elimination round.

With her outstanding all-around offensive prowess, she also bagged the 1st Best Outside Hitter as well.

Her defense was top-notch as well, going sixth in reception at a 40.85 efficiency rate while being eighth in digs at 2.38 per set.

Belen also knotted Dzi Gervacio’s record in most service aces in a single match with eighth. She did it against University of the Philippines last June 4.

Lamina tallied 5.81 excellent sets per set, while Nierva registered a 55.96 receiving percentage and 4.4 digs per set. Solomon had 145 spikes on a 38.98 percent success rate.

Ateneo de Manila University’s Faith Nisperos nabbed the 2nd Best Outside Hitter trophy to round out the awardees, delivering 228 total spikes on a 34.86 percent success rate.

All of the student-athletes in the All-UAAP team are products of Nazareth School-National University.

The National Basketball Association (NBA) today announced it will dedicate a new NBA Cares Live, Learn or Play center in the Philippines with a basketball court refurbishment at the Enchanted Farm village of Gawad Kalinga Community Development Foundation, Inc. (GK), a local non-profit organization that aims to alleviate poverty through affordable housing and community development programs, in Angat, Bulacan.

The project, which is part of the leaguewide NBA 75th Live, Learn or Play initiative to create and dedicate more than 50 new NBA Cares Live, Learn or Play Centers during the 2021-22 season, will begin this month and the refurbished court will be presented to the GK community in August with a ribbon-cutting ceremony and youth basketball clinic.

“The NBA’s mission is to inspire and connect people everywhere through the power of basketball and create a lasting impact in the communities where we operate,” said NBA Asia Managing Director Ramez Sheikh.

“The Philippines has been an integral part of the league’s 75-year history, and this initiative with Gawad Kalinga reinforces our commitment to bringing Filipinos together through their shared love of the game.”

NBA Cares is the league’s global social responsibility program that builds on the NBA’s mission of addressing important social issues in the U.S. and around the world.  Internationally, NBA Cares has created more than 357 places where kids and families can live, learn, or play in 40 countries and territories.

In July 2017, the NBA revamped an indoor court in Santa Mesa, Manila which was part of a regional NBA Cares initiative that refurbished courts across Southeast Asia. 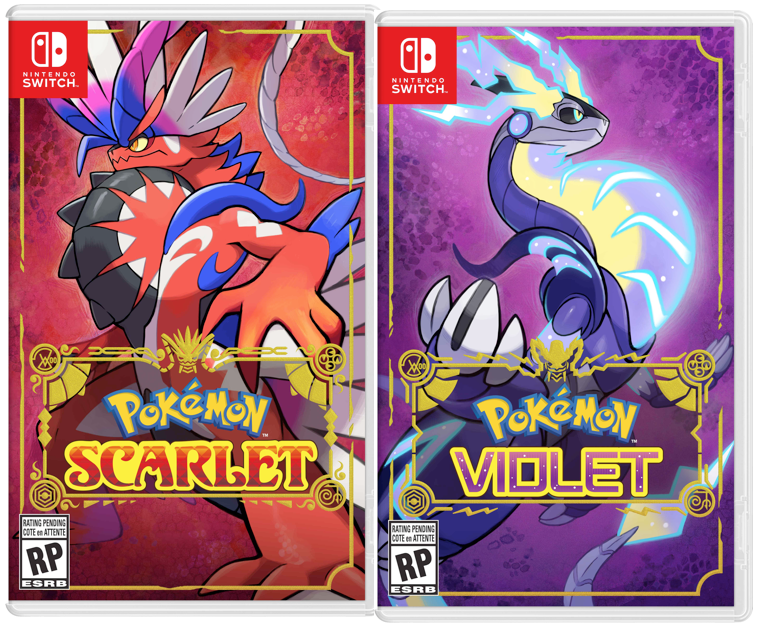 The Pokémon Company is pleased to announce the official release date of Nintendo Switch software titles Pokémon Scarlet and Pokémon Violet on Friday, November 18, 2022. The scheduled release will reveal a new cover art with the legendary Pokémon Koraidon and Miraidon!

Appearing in these new titles, the new legendary Pokémon Koraidon and Miraidon are on each cover. The title logos are embellished with foil stamp-like designs that include Legendary Pokémon motifs. The packages of these games look similar to old book covers that evoke anticipation that a new story lies before you that’s about to begin.

The World of the Pokémon has Evolved

Pokémon is a game for all ages and Pokémon Scarlet and Pokémon Violet are the first open-world RPGs in the series. As you enjoy the hallmarks of the series—meeting, teaming up with, battling, training, and trading Pokémon—you’ll also be able to immerse yourself in a newly evolved adventure.

In an unbound adventure spread across an open world, Pokémon Scarlet and Pokémon Violet offer you an open-world experience that only the Pokémon series can deliver—one that is welcoming even to newcomers to the series.

You can experience a new style of adventure in a world where you’re free to explore at your leisure, unhampered by following a story. You will, of course, have to embark on a journey to hone your skills as a Pokémon Trainer, but many more discoveries and stories await you. You will be able to meet a variety of people and Pokémon, and have new adventures in the world of Pokémon the way you want to.

For deeper experience with multiplayer gameplay, Pokémon Scarlet and Pokémon Violet allow multiplayer gameplay with up to four players. Along with series staples, such as trading and battling Pokémon, you will be able to explore the various locations of the region in these games with other players. You can discover new Pokémon and explore unfamiliar areas with your friends and family, opening the door to an adventure more precious and fun than ever!

New Pokémon and Characters to Meet

Three Pokémon from which you’ll choose your first partner have been revealed: Sprigatito, Fuecoco, and Quaxl.  With their unique personalities and abilities in battle, imagine how your own adventures with them might unfold!

Sprigatito is capricious and attention-seeking. It may sulk if it sees its Trainer giving attention to a Pokémon other than itself.

A Kneading Move That Releases a Sweet Aroma

When Sprigatito kneads and rubs with its forepaws, a sweet aroma is released that can mesmerize those around it. This aroma has therapeutic qualities and makes opponents lose their will to battle.

Fur with a Similar Composition to Plants

The composition of its fluffy fur is similar to that of plants, letting it create energy by absorbing sunlight. It adds moisture to its fur by grooming itself, which aids its ability to photosynthesize.

Fuecoco is laid-back and does things at its own pace. It loves to eat, and it will sprint toward any food it finds with a glint in its eye.

External heat is absorbed by the square scales on Fuecoco’s stomach and back, then converted into fire energy. These scales are always warm, and at times they can also grow very hot.

Flickering atop Fuecoco’s head is fire energy that is leaking out from inside the Pokémon’s body. When Fuecoco gets excited, its head spouts more flames.

Quaxly is a serious-mannered Pokémon that will follow in its Trainer’s wake. It’s tidy, and it especially dislikes getting its head dirty.

A Glossy Gel Protects Its Body

Its body is always glossy because the gel secreted by its feathers repels water and grime. The coif on its head is slicked back using a rich, moist cream, and it becomes unkempt when dry.

It Uses Its Strong Legs to Swim Freely

It has strong legs and is able to swim without difficulty even in places with strong currents. In battle, it kicks its opponents swiftly and repeatedly.

For the first time in the series, one of two different professors will appear in your game depending on the version you choose to play.

Your friend and rival, Nemona, has a sunny and energetic disposition, and she absolutely loves Pokémon battles. She’s an experienced Pokémon Trainer and serves as a reliable guide for you on your adventures. She has undisputed skill in battle—though it does also seem that she’s not the best at throwing Poké Balls.

Not only is the fur that covers its body good insulation against the cold, but it also serves the purpose of storing electricity. When it feels uneasy, this cautious Pokémon will begin rubbing its cheeks, preparing itself to discharge an electric shock.

Lechonk is a gourmand with an excellent nose. It  uses its sense of smell to find and eat only the most fragrant wild grass and the richest Berries. As a result of its dining habits, it has come to radiate an aroma resembling herbs that bug Pokémon dislike.

If attacked by an opponent and startled, it will charge forward in a panic. It may appear fat at first glance, but in reality, the Pokémon’s body is mostly muscle built by constantly walking around in search of food.

Smoliv has oil so bitter and astringent it will make you flinch. The oil that comes out of its head has a very strong bitter taste, and it is not suitable for consumption. When startled or attacked, Smoliv will shoot this oil out, slowing its opponent down. It will then seize that moment to run away.

Fine without Eating or Drinking

In the fruit on its head, Smoliv stores oil made from nutrients it gathers through photosynthesis. As a result, it can go for a week without eating or drinking. It prefers dry and sunny climates, and it seems to spend its days sunbathing.

Moreover, a Double Pack that includes a Pokémon Scarlet game and a Pokémon Violet game will be released on the same day as the individual games.

8 facts about foodpanda on its 8th birthday in PH