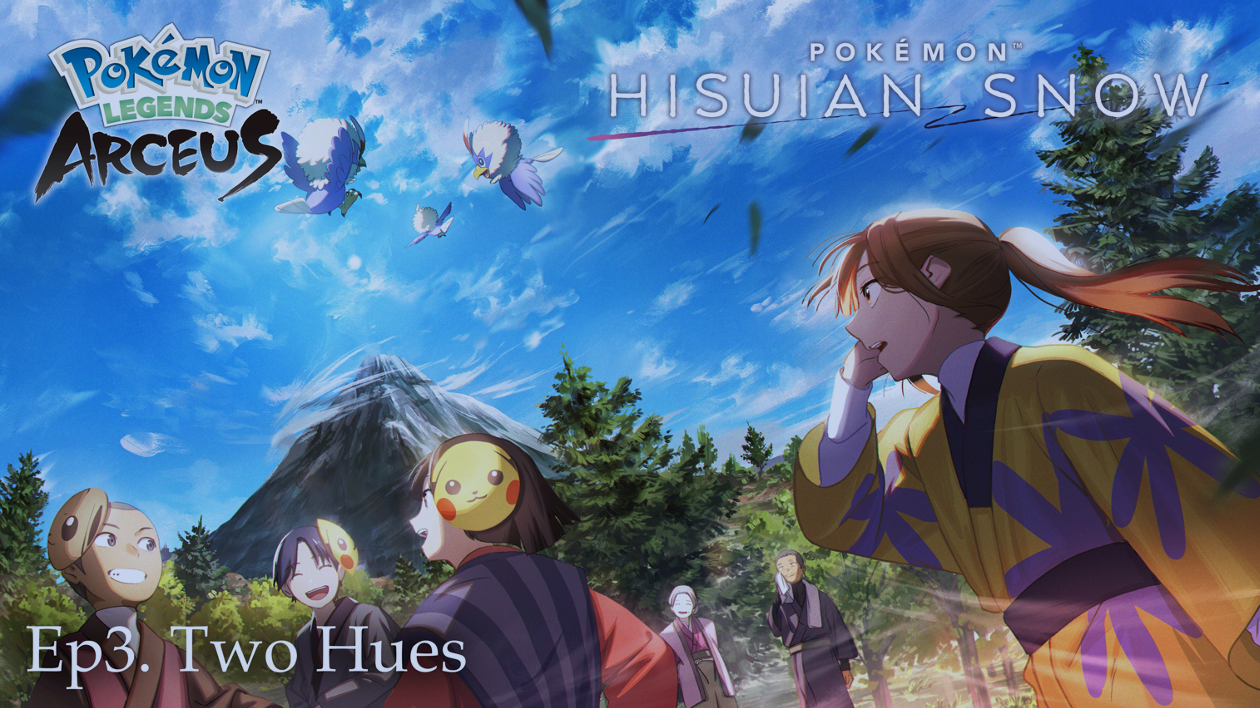 The Pokémon Company, makers of the “Pokemon Legends: Arceus” animated web series, based on the namesake Nintendo Switch game, has recently released the final episode, “Two Hues,” on YouTube. This original series includes three episodes in total and takes place in the Hisui region.

“Two Hues” is a story of an age long ago when there was still a divide between people and Pokémon. Aboard a boat bound for the Hisui region, Akio reminisces about the first time his father brought him there. Akio’s father taught him when he was a child, “People and Pokémon cannot live together.” But then, Akio met a single Hisuian Zorua in a snow-covered forest… Can people and Pokémon really not coexist?

In the final episode, Cyllene from Pokémon Legends: Arceus makes an appearance.

Cyllene is strict both with others and with herself. In the game, she was the captain of the Survey Corps, but in Hisuian Snow,which takes place several years prior, she is addressing a certain incident that occurred in Hisui as a member of the Security Corps.

In celebration of the release of the final episode, you can receive a Shiny Baneful Fox Mask in Pokémon Legends: Arceus.

The Baneful Fox Mask is a Hisuian Zoroark-themed mask that the protagonist, Alec, wore during Hisuian Snow.

We hope you will enjoy your continuing adventures in the Hisui region with this mask.

You can receive the Shiny Baneful Fox Mask by choosing Get via Internet from the Mystery Gifts feature in your game up until Wednesday, May 31, 2023.

Note: You will need to connect your Nintendo Switch system to the internet to claim Mystery Gifts.

Note: The user profile on your system will need to be linked to a Nintendo Account in order to connect to the internet. (This does not require a paid Nintendo Switch Online membership.)

Note: It takes approximately two hours of play time before you are able to access the Mystery Gifts function.

In this game, the Pokémon series takes on a bold new direction fusing action with RPG elements. The adventure is set in a region known as Hisui, long before the events of Pokémon Diamond and Pokémon Pearl. As the protagonist, you’ll set out to create the region’s first Pokédex. You’ll need to catch, survey, and research the wild Pokémon of this region to create a complete Pokédex. Explore the region, catch lots of Pokémon, fill out your Pokédex, and experience the gameplay of the Pokémon series from a new angle that brings you closer to this world and the Pokémon and people that make it up.