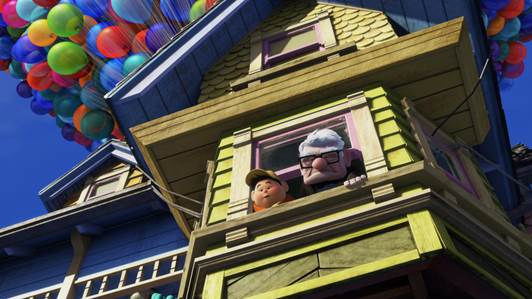 Since the release of its very first feature film, Toy Story in 1995, Pixar is best known for its award winning, emotionally provoking and visually stunning animation films. We round up eight outstanding movies ranging from galactic superhero adventures in Lightyear to an unforgettable Italian countryside with Luca and a trip to The Great Before in Soul to answer life’s most important questions.

It’s time to get the tissues ready!

A sci-fi action adventure and the definitive origin story of Buzz Lightyear, the hero who inspired the toy, Lightyear follows the legendary Space Ranger after he’s marooned on a hostile planet 4.2 million light-years from Earth alongside his commander and their crew. As Buzz tries to find a way back home through space and time, he’s joined by a group of ambitious recruits and his charming robot companion cat, Sox. Complicating matters and threatening the mission is the arrival of Zurg, an imposing presence with an army of ruthless robots and a mysterious agenda. The film features the voices of Chris Evans as accomplished Space Ranger Buzz Lightyear, Uzo Aduba as his commander and best friend Alisha Hawthorne and Peter Sohn as Sox.

Turning Red introduces Mei Lee (voice of Rosalie Chiang), a confident, dorky 13-year-old torn between staying her mother’s dutiful daughter and the chaos of adolescence. Her protective, if not slightly overbearing mother, Ming (voice of Sandra Oh), is never far from her daughter—an unfortunate reality for the teenager. And as if changes to her interests, relationships and body weren’t enough, whenever she gets too excited (which is practically ALWAYS), she “poofs” into a giant red panda! Directed by Academy Award® winner Domee Shi (Pixar short “Bao”) and produced by Lindsey Collins.

Set in a beautiful seaside town on the Italian Riviera, Disney and Pixar’s original feature film Luca is a coming-of-age story about one young boy experiencing an unforgettable summer filled with gelato, pasta and endless scooter rides. Luca (voice of Jacob Tremblay) shares these adventures with his newfound best friend, Alberto (voice of Jack Dylan Grazer), but all the fun is threatened by a deeply-held secret: they are sea monsters from another world just below the water’s surface. Luca is directed by Academy Award® nominee Enrico Casarosa (“La Luna”) and produced by Andrea Warren (“Lava,” “Cars 3”).

Pixar Animation Studios returns to the world of Cars with the all-new original series Cars on the Road. Episodes follow Lightning McQueen (voice of Owen Wilson) and his best friend Mater (voice of Larry the Cable Guy) as they head east from Radiator Springs on a cross-country road trip to meet up with Mater’s sister. Along the way, every stop is its own adventure, with outrageous roadside attractions and colorful new characters.

What is it that makes you…YOU? Pixar Animation Studios’ all-new feature film Soul introduces Joe Gardner (voice of Jamie Foxx) – a middle-school band teacher who gets the chance of a lifetime to play at the best jazz club in town. But one small misstep takes him from the streets of New York City to The Great Before – a fantastical place where new souls get their personalities, quirks and interests before they go to Earth. Determined to return to his life, Joe teams up with a precocious soul, 22 (voice of Tina Fey), who has never understood the appeal of the human experience. As Joe desperately tries to show 22 what’s great about living, he may just discover the answers to some of life’s most important questions.

In Disney and Pixar’s Coco, a vibrant tale of family, fun and adventure, an aspiring young musician named Miguel (Anthony Gonzalez) embarks on an extraordinary journey to the magical land of his ancestors. There, the charming trickster Héctor (Gael García Bernal) becomes an unexpected friend who helps Miguel uncover the mysteries behind his family’s stories and traditions.

Pixar Animation Studios proudly presents the adventure of a lifetime! When Woody, Buzz and the gang join Bonnie on a road trip with her new craft-project-turned-toy, Forky, the innocent little spork’s hilarious antics launch Woody on a wild quest filled with unexpected new characters—and one long-lost friend! Toy Story 4 is a soaring masterpiece stuffed with spectacular animation, humor and heart.

A 78-year-old curmudgeonly balloon salesman, is not your average hero. When he ties thousands of balloons to his house and flies away to the wilds of South America, he finally fulfills his lifelong dream of adventure. But after Carl discovers an 8-year-old stowaway named Russell, this unlikely duo soon finds themselves on a hilarious journey in a lost world filled with danger and surprises.

Besides these Pixar shows, fans in the Philippines can look forward to a variety of original feature-length films, live-action and animated series, short-form content and documentaries from Hollywood to Hallyu including our iconic brands Disney, Marvel, Star Wars, National Geographic and Star.