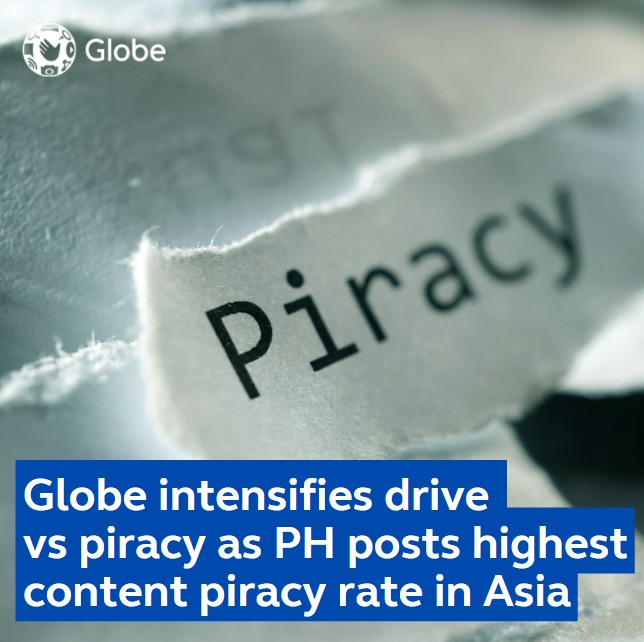 GLOBE has further intensified its drive against illegal streaming and downloading of content as the Philippines, together with Vietnam and Malaysia, again topped the list of Asian countries with the highest piracy rates.

Piracy has been a lingering problem around the world, posing a danger to the viability of businesses and the livelihood of content creators, and also exposing users to malware and other online threats.

“The ill-effects of online piracy cannot be underestimated. Globe continues to ramp up initiatives to mitigate, if not fully stop piracy, and make a positive societal impact.  We also work with coalitions and partners like the Asia Video Industry Association (AVIA) and the IPOPHL to help address these challenges,” said Anton Bonifacio, Globe Chief Information Security Officer.

The recent YouGov 2022 Piracy Landscape Survey commissioned by AVIA’s Coalition Against Piracy (CAP) revealed that 61% of local respondents have consumed pirated content. Their primary sources are social media and messaging platforms at 44 percent.

Other sources of pirated content include streaming and torrent sites at 20% and illicit streaming devices and apps, also at 20%.While piracy continues to be a major concern in the country, there remains a high consumption of legal content.  The survey showed that 81% of respondents said they consume content through legitimate platforms, although the figure is still the lowest in the region.

AVIA is now looking at commissioning YouGov to conduct the survey at the end of every year to help identify where, how, and why consumers are accessing illegal content and the impact of enforcement actions. It is also talking with social media platforms to discuss the possibility of taking down pirated content.

“The Philippines not only has one of the highest piracy consumption rates in the Asia Pacific region, but the lowest consumption rate of legitimate content from those countries surveyed.

However, there is hope. The Philippines also has the highest percentage of consumers who would use legitimate content if their access to pirate services was blocked, and the highest percentage of consumers in the region in countries that do not currently block pirate sites who believe that blocking pirate sites is the best measure to reduce piracy,” said CAP General Manager Matthew Cheetham.

“With these factors in mind, we encourage the Philippine government to urgently amend the current copyright legislation to allow for an efficient and effective regulatory site blocking regime,” he said.

On the other hand, Globe educates its customers on how to become responsible and intelligent custodians of content since the launch of the #PlayItRight campaign in 2017. The initiative cuts across several industries such as film, music, gaming, digital literacy, and education.
Aside from blocking confirmed illegal piracy sites, the campaign makes consumers aware that piracy websites can be hotbeds for illegal online activities, malware, and other cybersecurity threats.

Through its Digital Thumbprint Program, Globe has maximized its influence within the education and entertainment sectors. The advocacy has been integrated into the K-12 curriculum of the Department of Education in 2019.

Globe supports efforts to modernize the country’s intellectual property law, with several bills pending in Congress that aim to boost protection of intellectual property rights. Among the amendments sought is granting greater power to the Intellectual Property Office of the Philippines to take down or block online sites violating copyright laws and penalize violators with steeper fines.

In line with its campaign for a safer Internet, Globe also hopes to see the enactment of the bill amending the law which penalizes online sexual abuse and exploitation of children, which Congress is expected to ratify within the year. The measure aims to expand child protection against cyber threats and address gaps in existing laws such as the Anti-Child Pornography Act, the Special Protection of Children against Abuse, Exploitation and Discriminaton Act, and the Anti-Trafficking in Persons Act.

Globe supports the United Nations Sustainable Development Goals, particularly UN SDG No. 9, highlighting the roles of infrastructure and innovation as crucial drivers of economic growth and development. It is committed to upholding the UN Global Compact principles and contributing to 10 UN SDGs.