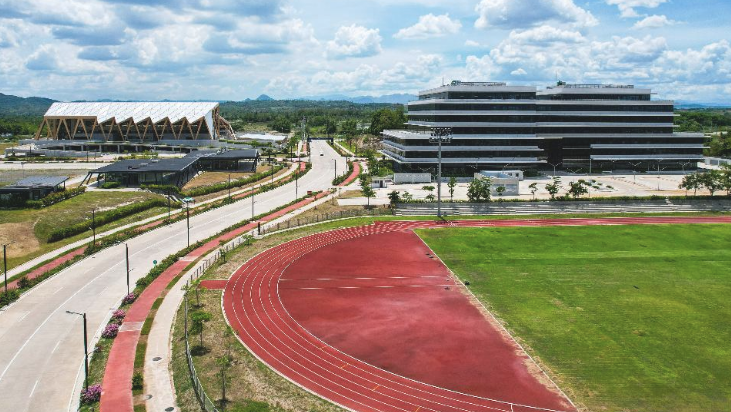 Pursuing their shared vision of positioning Clark as the premier destination for cycling and running, the Bases Conversion and Development Authority (BCDA), and GoClark Sports and Events will be hosting the first New Clark City (NCC) Duathlon race this July 17.

Around 650 professional and amateur duathletes are expected to participate in a test of strength and endurance, with New Clark City’s iconic sports facilities and extensive road network as backdrop.

The event signals GoClark’s return to New Clark City after two and a half years, following the hosting of the New Clark City Triathlon back in October 2019.

It is the first of three GoClark-organized events lined up in New Clark City this year, to be followed by the Clark Cycling Classic on August 27 to 28, and the New Clark City Multisport Weekend on September 24 to 25.

“The New Clark City Duathlon will be our inaugural duathlon race with New Clark City as the venue partner. It will also be the third leg of Clark’s Duathlete of the Year Race Series,” said Jumbo Tayag, GoClark race director.

“The series is aimed at supporting and highlighting Duathlon Elites and is part of GoClark’s program of developing and finding grassroots talents in the sport. Through the series, we also aim to highlight Clark and New Clark City as premier training and racing destinations for cycling, running, duathlon and triathlon,” he added.

BCDA Senior Vice President for Corporate Services Arrey Perez welcomed GoClark’s return to New Clark City, as well as the hundreds of athletes who will compete during the event.

“We hope this exposure will stir up more interest in the sport and expand the talent pool to choose from for decades to come. Our country abounds in talent; and that talent just needs to be nurtured. And what better place for this to happen than here in New Clark City–the home of future champions,” Perez said.

Duathletes will compete in different age groups. All finishers will receive a four-inch Finisher’s medal, while the top three of each group will receive additional plaques. The event will be highlighted by the ELITE races, to be joined by members of the National Team training pool.

“Since New Clark City played host to the 2019 Southeast Asian Games, the facilities are world-class. The BCDA also built a massive network of roads that can be used for cycling, duathlon and triathlons,” Tayag said.

Comeback of multisport events in Clark

GoClark Sports and Events aims to promote an active lifestyle by organizing a series of endurance and multisport events in Clark, which is now dubbed as the “Duathlon Capital of the Philippines.”

This year, GoClark has already organized three events at the Clark Freeport Zone–Clark Duathlon Classic, Clark Triathlon Classic and TriFactor Philippines Duathlon–all of which got strong participation from duathletes and triathletes.

“All three prior races have been well-participated and this is a good sign that people are starting to get comfortable with these events. Nevertheless, the virus is not going anywhere, and we still have the responsibility to wear our masks when necessary.  Of course, one of our advocacies is getting into an active lifestyle, and this helps combat any virus if we are strong and healthy,” Tayag said.

To keep this momentum going, GoClark will be holding more events in Clark and New Clark City this year.

The Clark Cycling Classic to be held on August 27 to 28 will feature individual and team trial cycling courses and a Gravel race. The New Clark City Multisport Weekend, which will take place on September 24 to 25, will be highlighted by the return of the New Clark City Triathlon.

“We hope that through this race and upcoming sporting events, more homegrown athletes will emerge as stronger individuals who can serve as examples to their families, communities, and the Filipino nation,” Perez said.

CLARK FREEPORT – As part of their business mission in the Philippines, a delegation from Australia composed of industry leaders on various business sectors recently visited this Freeport to explore potential trade, tourism, and investment opportunities.

In a simple activity held at the New Clark City (NCC) on Wednesday, the delegates were given presentations on the current developments in NCC, Clark Freeport Zone, Clark International Airport, and Tourism Infrastructure and Enterprise Zone Authority (TIEZA).

“The province of Pampanga has already prepared its land development plan with Clark as its hub, and implementing this is underway. The BCDA has integrated four major contiguous investment districts, mainly the Clark Freeport Zone, Clark Global City, Clark International Airport, and Subic. My wish related to your visit is for the Philippines to have closer ties and expand the depth of scope of our economic cooperation with Australia and New Zealand,” Arroyo said.

Meanwhile, in his speech, Pamintuan thanked the delegation for visiting Clark and for choosing the Philippines as an investment destination. He also mentioned that the business mission will fortify the economic cooperation between Australia and the investment hubs in the Philippines.

“Your visit signifies the strengthening of the economic partnership between Australia and the Freeport Zones in Clark, Subic, represented by Bases Conversion and Development Authority, Clark International Airport Corporation, Clark Development Corporation, and Subic Bay Metropolitan Authority,” he said.

Pamintuan also cited how new investment opportunities will intensify the promotion of inclusive development that will benefit the communities surrounding the Freeport.

“The forging of new investment and trade cooperation will benefit the local government units that form massive economic and investment corridor traversed by the Subic-Clark- Tarlac Expressway,” he added.

For her part, Zosa, in her presentation, underscored the suitability of Clark as an investment hub.

“Our jewel is really Clark. It’s the biggest and has the best potential for unlocking the value of these prime properties,” she added.

Aside from Clark, the delegation also visited the areas of Bataan and Subic for other set of activities that include investment briefings and business-to-business meetings. 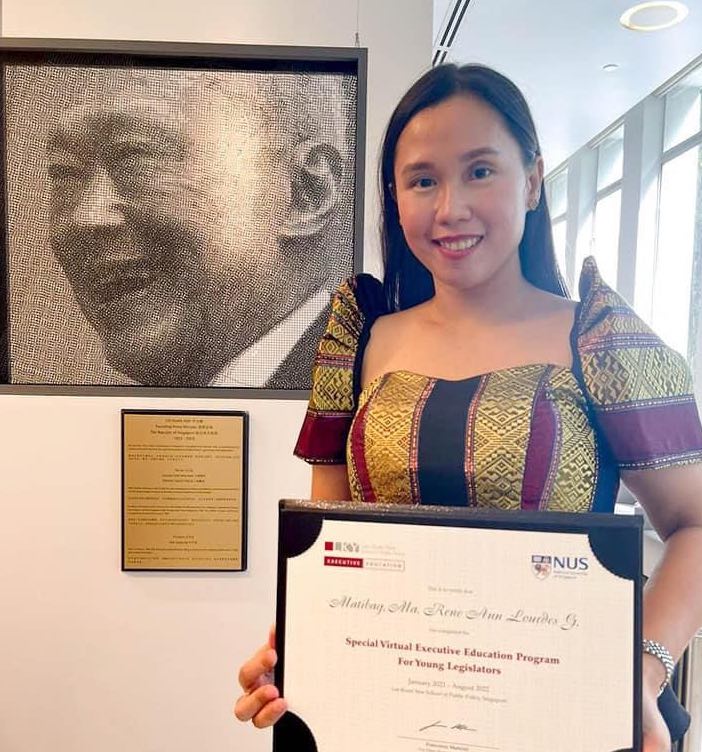 The Anti No-Permit, No-Exam Bill of Rep. Ann Matibag of San Pedro City of the first district of province of Laguna passed on first reading in the House of Representatives.

The proposed house bill (1486) seeks to allow students to take their preliminary, midterm or final examinations without the need to secure a permit as proof of payment of tuition and other school fees.

“It is really high time to get rid of the ‘no permit, no exam policy’ being imposed in schools and most universities,” said Matibag, whose anti-trans fat bill was also passed on first reading.

“Every student has a right to finish his/her studies. Now that the opening of classes is near, no student should have his/her education interrupted just because he or she cannot pay tuition fees at the moment,” added Matibag, who is known for her initiatives for the youth and mother sectors.

Despite the ongoing global economic inflation caused by the pandemic and the rise in fuel prices, Rep. Matibag explained that the right of Filipino students to study in private and public universities must not be affected by their economic status.

Matibag believes that education is not a privilege, but an absolute right — reassuring parents that their children should be able to pursue their education without the heavy pressure to settle debts.

“In my explanatory note, it is time to have an act penalizing the ‘no permit, no exam policy’ in all educational institutions,” said Matibag, also a former Laguna provincial board member. “This is consistent with State policy to prioritize education, science and technology, arts and sports to foster patriotism.”

She added despite this mandate, many schools and college universities still prohibit their students to take their exams if they don’t settle or pay their tuition fees.

Matibag added that she is sad to learn that some colleges and universities are also capitalizing on hybrid classes, which cost them less on overhead expenses such as electricity and maintenance.

“We cannot allow our students and their parents to be exploited and used as milking cows especially during these hard economic times. The present condition is very depressing. We must correct it to guarantee the universal right to education of the Filipino youth,” Matibag added.

The Department of Education, meanwhile, announced the resumption of classes on August 22, 2022, while the full implementation of face-to-face classes will start on November 2, 2022.

Obiena back with PH team 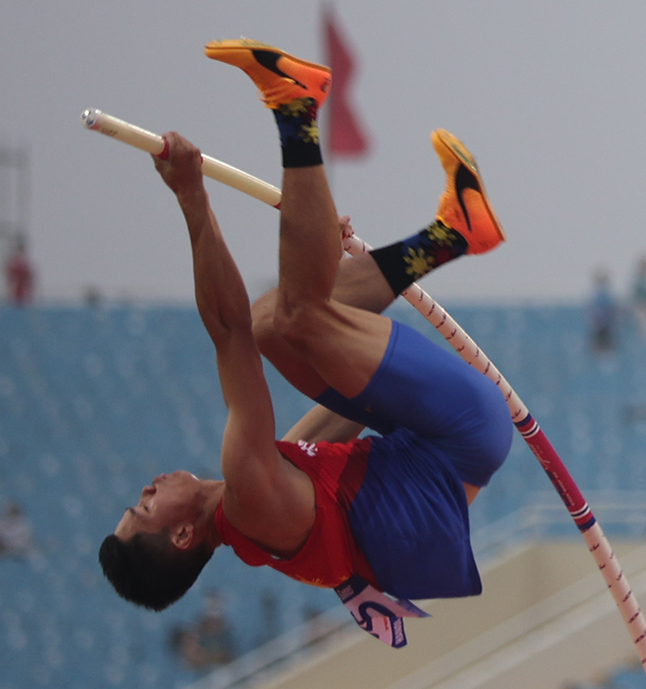 Olympian Pole Vaulter Ernest John Obiena has been formally reinstated to the national team after Philippine Athletic Track and Field Association (PATAFA) endorsed his re-inclusion along with five other athletes to the Philippine Sports Commission.

This happy development came after majority of PATAFA Board members voted on it during their special board meeting held last Saturday, August 13.

PSC Executive Director Atty. Guillermo Iroy Jr. said that this decision takes effect this month and that the changes fall within the existing team quota of athletics.

Current PSC Officer in charge, Commissioner Bong Coo is pleased with this turn of events saying that “we are thankful to the PATAFA leadership” for taking this step to solidify the strength of our national athletics team.