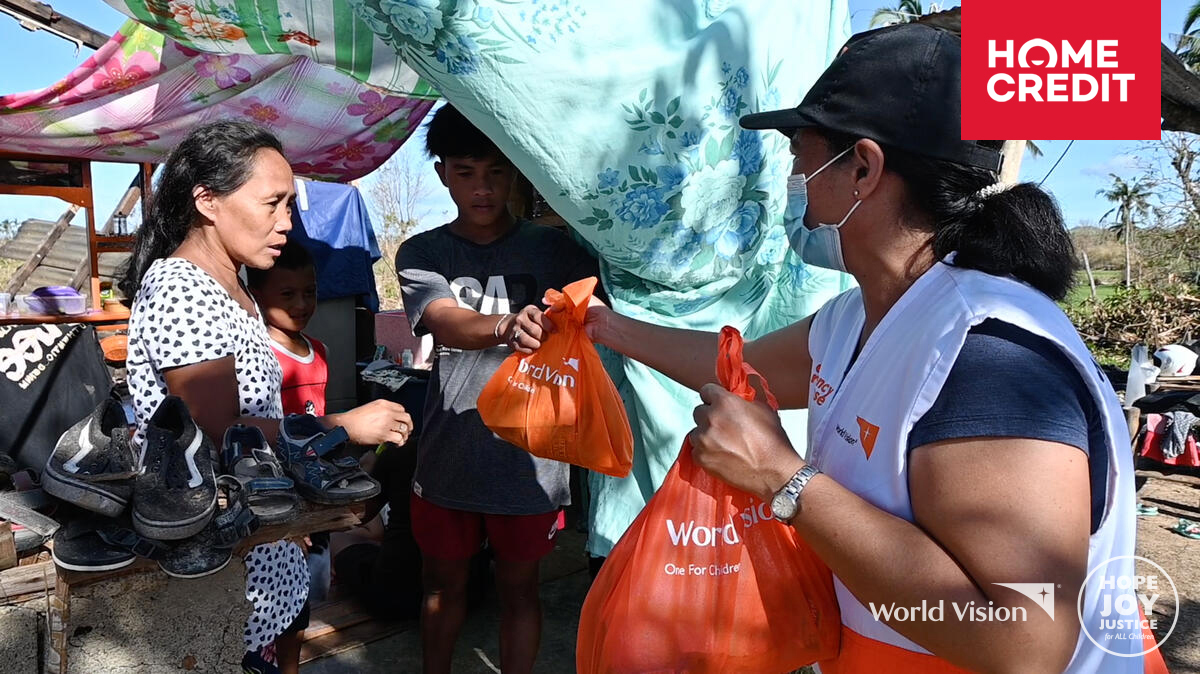 More than 9,000 families of Odette-stricken communities in Visayas and Mindanao received life-saving relief items from World Vision Ph, with the timely donation and support, in part, by Home Credit Ph.

Almost a month after Typhoon Odette (international name Rai) devastated the southern Philippine provinces, a total of 9,756 families, as of January 12, have received relief packs which included hygiene kits, sleeping mats, kitchen and cooking sets, and emergency shelter kits consisting of tarpaulins and ropes among others.

In Surigao, water purifier packets and containers have also been distributed by World Vision to areas where access to potable water remains a challenge. A huggy tent, which can be installed for storage and as hospital triage, was also sent to help manage increasing patients due to food and water-borne illnesses.

“Home Credit’s support was a big help to our disaster relief operations. We are glad that we can always count on them in situations like these. With their contribution, we can help rebuild these communities faster and help the survivors move forward,” says World Vision in the Philippines national director Rommel V. Fuerte.

With the help of partners like Home Credit, the child-focused humanitarian agency aimed to reach a total of 10,000 families or 50,000 individuals in the worst hit areas, prioritizing the most vulnerable including the elderly, pregnant women, and children.

Over 1 million pesos was initially earmarked by the consumer finance company starting with relief distribution through GMA Kapuso Foundation, benefiting 112,712 individuals from the most hard-hit areas. Some 1,012 Home Credit employees who were affected by the typhoon also received financial aid from the company.

Miller gets inspiration from Filipinos 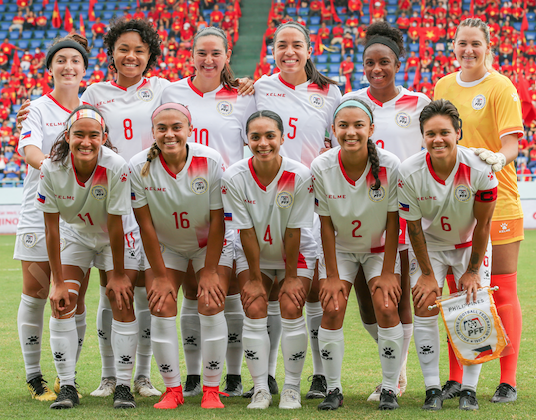 SKIPPER Tahnai Aniss scored a brace as the Philippine outplayed Singapore 7-0  yesterday to seize the Group A lead in the 15th Asean Football Federation Women’s Championship at the Rizal Memorial Stadium.

Doing a yeoman’s job for the Filipinas, Aniss scored in the 10th minute off an own-goal by Singapore goalie Beatrice Tan then had a long looping header in the 19th in anchoring  the hosts to their second straight win following a 1-0 upset of Australia last Monday.

With her accurate cross passes, Aniss also set up Sarina Bolden, who scored the game-winner against Australia, with another header in the 38th minute and newcomer Kaya Hawkinson, who scored on a glancing header 11 minutes into the second half.

Slipping past two Singapore defenders, teener Isabella Flanigan opened the scoring floodgates in the 8th minute, Sara Eggsevik had one in the 56th  and Anicka Castaneda , who came off the bench in the second half, added the seventh marker on a follow-up in the in the 69th.

With the victory virtually ensured,  Aniss earned a well-deserved respite and was relieved by Kathleen Rodriguez in the 58th minute of the competition organized by the Philippine Football Federation.

With their second consecutive win, the charges of coach Alen Stajcic were proudly on top of Group A with six points while the Singaporeans absorbed their first loss in two matches after a scoreless draw with Malaysia last Monday.

Earlier, Thailand refused to be cowed by Australia yesterday, showing remarkable resiliency and rallied for a well-earned 2-all draw against their fancied rivals.

Down at 1-2 at the break, the never-say-die Thais levelled the count through Ploychomphoo Somnuek, who struck with a nifty 20-yard volley that hit the top right corner of the net beyond Aussie goalie Jada Mathyssen-Whyman’s reach in the 60th minute.

Kanyanat Chetthabutr had earlier kept the four-time AFF Women’s football champions in the thick of the fight by scoring their first goal from near the midcourt line in the 40th minute, hitting the ball just hard enough past Mathyssen-Wyman, who strayed too far out of the net.

Following their 4-0 rout of Indonesia last Monday, the charges of Japanese coach Miyo Okamoto had four points and were in second spot in the group.

The Matildas, who dropped a 0-1 decision to the Filipinas two days ago, had only one point to show in two matches.

Aiming to maximize his bench, Stajcic made some changes in his starting lineup, tapping Inna Palacios, making her 50th cap,  as the goalie over Oliva McDaniel while giving midfielder Hawkinson and defender Maya Alcantara their national team debuts.

“0bviously this showed we have a deep bench and the great unity of the team,” noted Stajcic in utilizing most of his players.

The Filipinas try to enhance their semifinal prospects when they go for their third consecutive victory as they  face Malaysia, which drew 1-1 with Indonesia at the Binan Stadium, tomorrow.

AS LONG as he is in power, newly appointed Commission on Audit chairman Atty. Jose Callangan Calida recently assured Filipinos that public public funds will be safeguarded.

“We are not just acting to promote excellence, but also to make it a habit here in COA. We have to do our job properly, be the best in our field,” Calida of Davao City said, adding that the government’s auditing agency will be transparent and fair to the public.

Calida met the media during his first day in the office, saying that he would do whatever it takes to protect every single centavo of the people’s money.

The Commission on Audit is an independent constitutional commission with the primary function to examine, audit and settle all accounts and expenditures of the funds and properties of the Philippine government.

“COA auditors should correctly scrutinize and carefully inspect accounts. I believe they are the best in the field and we’re here to fight corruption in the government,” he added. “I am warning anybody in COA that if there are shenanigans and mischievous activities, I will remove them.”

The former Solicitor General under the term of former President Rodrigo Duterte met for the first time COA’s commissioners, lawyers and other officials on Monday morning at the COA main office in Quezon City.

Calida, who will be turning 72 on Thursday, also thanked employees of COA for the warm welcome. “Those who are earnest in their work, they will remain in this office and will be rewarded.”

“We are here to help the new COA chairman set up everything in his first day in office. We believe in him, that’s why we volunteered to give an extra hand to help our Good Chairman in his first day. Atty. Calida is our idol. We call him the Enforcer, because he always enforces the law,” Joson said.

“President Marcos appointed a very reliable person to COA. With his track record, he always get the job done. He will not let us down,” he added.

Newly proclaimed President Ferdinand “BongBong Marcos Jr. appointed Calida to lead the COA due to his superb expertise in law and achievements when he led the Office of the Solicitor General, among other government agencies. 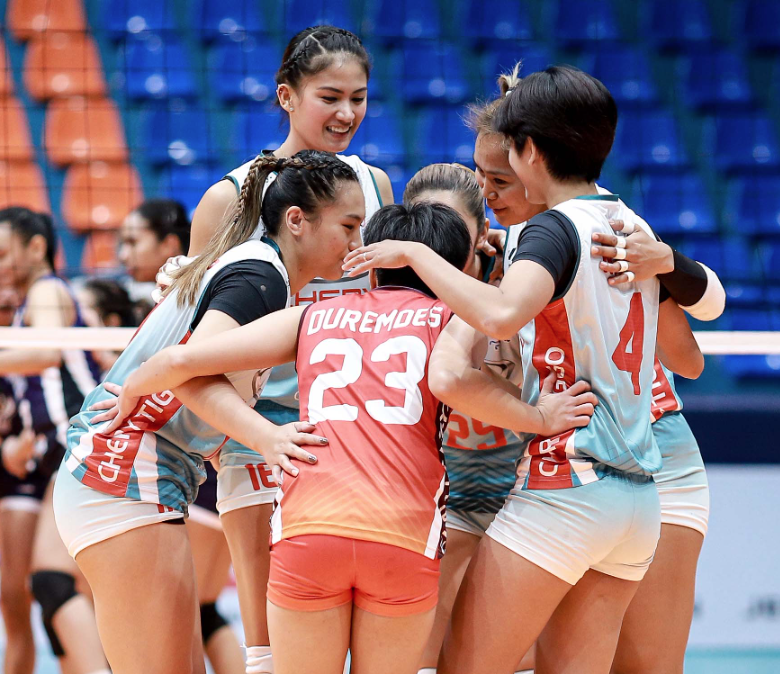 From top to near-bottom, Chery Tiggo believes there’s no way to go but up as the Crossovers seek to get over the hump of their Premier Volleyball League Open Conference debacle with another top podium finish in the PVL Invitationals unfolding this weekend.

Sure, Jaja Santiago’s absence told heavily on their unsuccessful title-retention drive but limping to eighth place in a field of nine certainly didn’t speak well of the caliber of the players, who, under then-head coach Aaron Velez, bucked the odds and defanged the fancied Creamline Cool Smashers in a gripping Open finale in bubble setup in faraway Ilocos Norte last year.

But the Crossovers struggled without the 6-5 middle blocker in the recent Open that saw them grope for form at 1-3 in pool play, lose to the Cool Smashers in the quarterfinals and bow to the cellar-dweller BaliPure Water Defenders in the classification round.

The team management felt it was time to do a crossover, tapping coach Clarence Esteban to whip the team back into fighting form, fulfill the team’s goal to rebound and earn at least another crack at the championship.

That’s despite the pressure and challenge not just from the rest of the six other local squads but also from two top-notch foreign teams spicing up the title chase in the second round of the mid-season offering of the league organized by Sports Vision.

“Our lineup is intact since all players have existing contracts. So our focus is on improving their skills and abilities. We want them to play as a team and we will instill the importance of the role of each individual inside the court,” said Esteban, also the man at the helm of UST boys’ volley squad and current coach of Mapua’s women’s team.

“Expect us to give our very best to rebuild and organize the team for us to achieve our goal,” he added.

Velez is now the team manager.

Meanwhile, the league will have a press conference with social media platform KUMU today (Wednesday) from 2 p.m. to 4 p.m. at the Infinity Ballroom of F1 Hotel Manila in Global City, Taguig.

“We knew what we went through the last conference, so we will work hard and will do it step-by-step to be able to perform well this conference,” said ace Dindin Santiago-Manabat.

The veteran power hitter, however, said Jaja Santiago still won’t be around due to her commitment in Japan but the team remains as talent-laden as ever with Mylene Paat, EJ Laure, Jasmine Nabor and Buding Duremdes raring to showcase their wares and the rest of the Crossovers eager to step up and put Chery Tiggo in the conversation again.

“While the team had a disappointing campaign the last time out, we will not disappoint the team management for the trust it has given us to lead and guide this team,” added Esteban, whose wards will be as much tested as the rest as it kicks off its campaign against Choco Mucho, one of the young but tall and talented squads in the league, on Saturday at the Filoil Flying V Centre.

Petro Gazz and PLDT complete the seven local teams with the top four after the single round elims advancing to the next stage that will feature Japan’s Kobe Shinwa Women’s University and Chinese-Taipei’s Taipei King Whales.

Matches can also be streamed on social media application KUMU and on the league’s official website pvl.ph.

All the games will be played at the San Juan venue except for the July 23 playdate that will feature Creamline against Choco Mucho, set at the SM Mall of Asia Arena in Pasay.