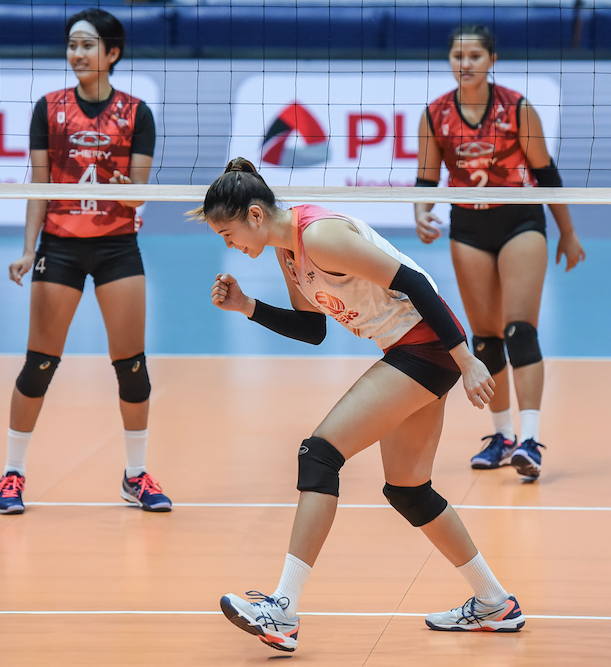 PLDT Home Fibr got untracked with a superb blend of power, blocking and setting, easing past a hapless Chery Tiggo side, 25-18, 25-19, 25-14, in a rousing start to a Premier Volleyball League Invitational Conference campaign at the Filoil Flying V Centre in San Juan yesterday.

Sure, Chery Tiggo continued to sorely miss the services of injured Dindin Manabat and EJ Laure, Buding Duremdes, Alina Bicar and Justine Dorog due to health and safety protocols, but the High Speed Hitters, who went into deep training during the break, came into the match exuding confidence and with a kind of resolve missing in their fifth place effort in the Open Conference of the league organized by Sports Vision.

“We’ve been training hard, pushing ourselves. Winning our first game is so important but we need to practice more and polish everything,” said Reyes, who topscored for PLDT with 15 hits, mostly on running attacks.

She added three blocks to likewise help anchor the team’s net defense with Palomata, who added two blocks and finished with seven points.

“We’re getting the kind of chemistry missing in the past. We wanted to start strong and our goal was to win our first game and hope to sustain the momentum,” said PLDT coach George Pascua, whose wards will be sternly tested when it faces Creamline on Saturday.

PLDT finished with 48 hits, doubling Chery Tiggo’s output and had six blocks and six aces against their rivals’ five and two, respectively, to underscore their domination of the first Open Conference champions in pro setting.

Basas went 13-of 37 on attacks and finished with 14 points while Samonte and Ceballos produced 11 and 10 hits, respectively, as the PLDT hitters scored almost at will on both sides behind playmaker Rhea Dimaculangan’s superb ball distribution.

The former UST stalwart delivered 21 excellent sets, 11 more than her counterpart Jasmine Nabor.Mylene Paat struggled for nine hits in a futile bid to rally the Crossovers, who had their shining moment when they surged ahead at 11-10 in the second frame, capped by Nabor’s service ace, the point of which the former National U mainstay yielded in her ensuing service turn.

Two hits from Basas coupled with Maika Ortiz’s attack error put PLDT back up by three, a lead the High Speed Hitters stretched to six, 22-16, on back-to-back Heather Guino-o aces.

PLDT never let up in the third, taking five of the first six points and pulling away at 14-6 and 24-12, Chery Tiggo took the next two points but yielded the next and the match on a service error.

With Manabat’s uncertain, Laure, Duremdes, Bicar and Dorog hope to suit up against Cignal HD on Saturday in an attempt to check on their skid after going 0-2 following its straight-set loss to Choco Mucho in last Saturday’s inaugurals.