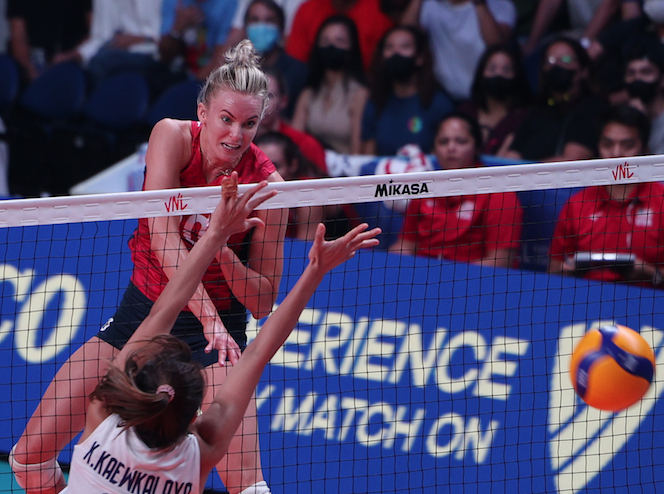 The Americans went perfect in four matches in Week 2 and improved to 7-1 overall for 21 points which allowed the Tokyo Olympic gold medalists to move closer in securing a spot in next month’s Finals in Ankara, Turkey.

A Penn State product, Frantti, who came through with 27 points, including two blocks, and 10 digs, was satisfied the way the Americans responded after yielding the opener to the Thais.

“We were able to settle in and get over the nerves and I think our team did a good job in regrouping,” said Frantti, who also led the scoring in USA’s straight-set romp of Poland on Friday.

One of the crowd favorites, Frantti was delighted with the reception she and the Americans received from the almost 5,000 fans at the fabled Big Dome.

“Oh, it’s unbelievable! I couldn’t hear myself on the court.  The fans are so loud. It was an unbelievable experience I won’t forgot. It’s amazing how you guys love volleyball so much. I really appreciate it,” said Frantti, who is making her USA debut this year.

With Lauren Carlini taking charge of distributing plays in the second set, Frantti and Robinson were able to produce the offense for the Americans dominate and level the match after the Thais took the opener.

The Thais had only a win to show in the Philippine leg and remained in the middle of the standings with an even 4-4 slate.

Ajcharaporn finished with 25 points and 11 digs while Chatchu-On contributed 13 points and 13 digs for Thailand.

Reveal your true beauty with NUA!