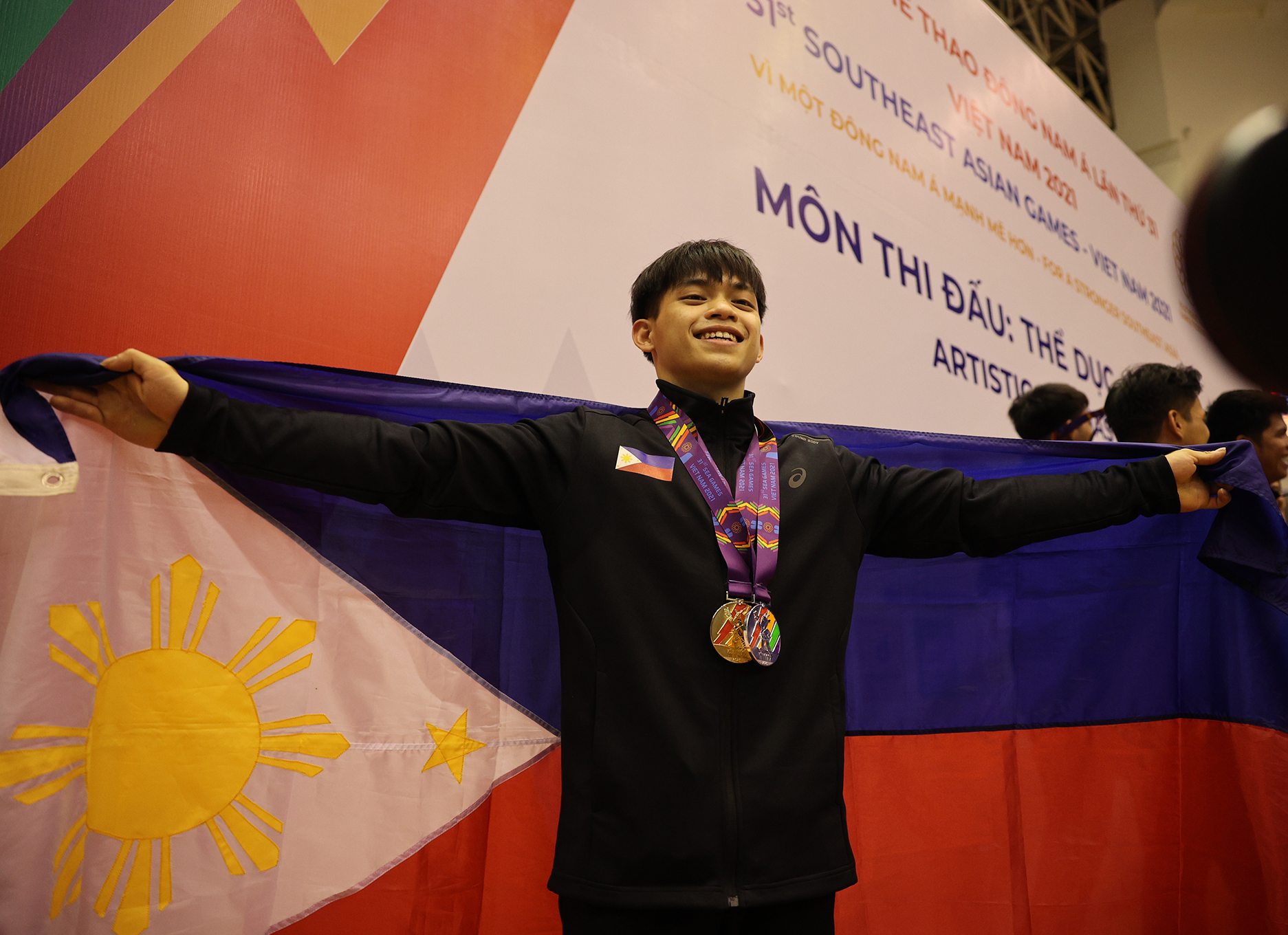 HANOI – World gymnastics champion Carlos Yulo and kurash bet Jack Escarpe delivered gold medals on Friday the 13th, averting what could have been a dreadful day for the Philippines as action went full blast in the 31st Vietnam Southeast Asian Games here.

Bucking a slip in the pommel horse that incurred a penalty, the 22-year-old Tokyo Olympian amassed 85.150 points in six apparatuses and bagged the individual all-around title, beating hometown bets Le Thanh Tung (84.050) and Dinh Phuong Thanh (82.450), who settled for the silver and bronze, respectively.

Aside from the three gold medals, the Philippines has also amassed seven silver and nine bronze medals to rank fifth, giving up fourth to Thailand (3-5-11). Vietnam started to pull away from the field with 20 gold, 11 silver and 15 bronze medals, followed by Malaysia (11-5-8) and Indonesia (5-8-1). Singapore and Myanmar also have two gold medals each.

Still to be concluded at press time is kickboxing, where six Filipinos are assured of at least silver medals.

“All I’m thinking is how to perform well and I think we did well,” said Yulo, who advanced to the finals of the vault, where he is the reigning world champion; high bar, parallel bar, pommel horse, rings, and floor exercise on Sunday and Monday.

“It’s not a bad first day at all,” said Gymnastics Association of the Philippines president Cynthia Carrion, who expects Yulo to win at least four gold medals.

“Yeah, we are expecting more, so much more actually,” added Carrion, who kept an eagle eye on the manual scoring of the judges in lieu of computerized scoring.

Team Philippines scored 301.600 to lead the field after the morning session but Vietnam stormed ahead in the afternoon session and finished the day with 321,250 points. Singapore finished third with 297.650 points.

Over at the Thanh Tri Gymnasium, Filipino 3×3 bets suffered shocking defeats and needed to do better Saturday to sustain their hopes of retaining the men’s and women’s crowns in the event initially held in 2019 in the Philippines SEA Games.

The Gilas women’s squad found a roadblock in its title-retention bid, the Vietnamese team powered by the Truong sisters who played NCAA Division I ball at Gonzaga University.

With Kayleigh and Kaylynne Truong draining crucial two-pointers, the host team battled back from a 6-10 deficit and pulled the rug from under the Filipinas, scoring a stunning 21-18 win to the delight of the full house crowd.

The foursome of Janine Pontejos, Afril Bernardino, Clare Castro and Angelica Surada, who started the day with a convincing 21-5 win over Cambodia, also lost to Thailand 14-21.

Teen tennis sensation Alex Eala made her SEA Games debut by helping the national women’s team beat Malaysia and into the semifinals.

Jones Inso won a silver medal in the men’s taijiquan event of wushu at the Cau Gias Sporting Hall with a score of 9.70 points, losing the gold to Malaysian Zhi Yan Tan, the last of the nine participants, who scored 9.71 points.

Gabriel Thomas Manotoc, John Edward Dy and Ethan Hernandez all scored 74 while Kristoffer Arevalo carded 78 in the men’s class, where Weerawish Narkprachar of Thailand led with a 68.

Nourish your skin with love!