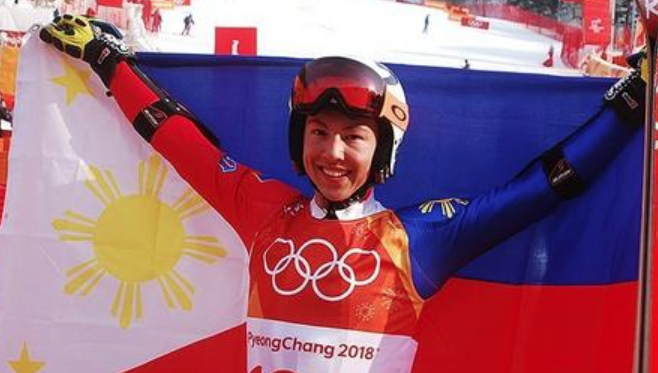 YANQING, CHINA—Asa Miller on Friday took a break from training, thanked Olympic weightlifting gold medalist Hidilyn Diaz for her message of motivation and focused on the opening ceremony, where he’ll be carrying the country’s colors in his second straight Winter Olympics.After three straight days of two-hour training sessions—alternating on the giant slalom and slalom of men’s alpine skiing—it was a day to rest his muscles and mindset for the two events he’ll be competing in on February 13 and 16.

“We decided to take today off, some rest for his sore muscles,” Miller’s father Kelly said from the Yanqing Olympic Village before they boarded a bus for the two-hour bus trip to the National Stadium, also called the iconic “The Bird’s Nest,” which also hosted the opening ceremony of the Beijing Summer Olympics 14 years ago.

“Rest days are just as important as training days,” said the 21-year-old Miller, who will be marching ahead of the small Philippine delegation in the parade of nations during the opening ceremony that starts at 8 p.m. and is expected to finish before 10 p.m.

“While skiing comes in short bursts of energy, it’s extremely taxing on muscles and I’m choosing to let my body heal to hopefully alleviate some of the small pains I’m experiencing currently,” said the Economics major at the Westminster College in Salt Lake City, Utah.

The Philippines walks into the 80,000-seat stadium at No. 69 among 91 participating nations.

“It’s good that we started with the slalom skis,” said Miller, who thanked the Philippine Sports Commission, led by chairman William “Butch” Ramirez for supporting his campaign here. “We’re starting to adjust to the snow and it’s different from where I normally ski, but it’s all good.”
Alpine skiing, one of 15 disciplines on the Games program, will be held at the National Alpine Skiing Centre on the slopes of Xiaohaituo Mountain.

The Millers said they will decide on Saturday morning whether to return to the mountain or strategize on the game plan on Saturday.

It wasn’t immediately known how many fans will be allowed at “The Bird’s Nest” for the opening ceremony, although organizers announced that 150,000 spectators will be invited to attend the events in two of the three clusters of venues in Beijing and Zhangjiakou. The alpine skiing and sliding sports in Yanqing will be held without fans.

Plans to sell tickets to international visitors were also scrapped because of the coronavirus pandemic.

Three-time Academy Award nominee Zhang Yimou is again directing the opening and closing ceremonies of these Winter Olympics as he did in the 2008 Summer Games. He withheld information on the show but said the entire ceremony will be “simple, safe and splendid.”Asa Miller, meanwhile, thanked Diaz for her inspiring message.

“It really means a lot to me,” Miller said of Diaz’s message of motivation and patience. “She’s really an amazing athlete. I am really super motivated after watching her capture the Olympic gold medal in the Tokyo Olympics.”

Diaz advised the Filipino-American from Portland, Oregon, to “just go on and don’t regret anything,” reminding him that “it doesn’t matter how many times he tries as long as he’s very dedicated to the sport he loves.”